Which nominal pressure is required for JDN Air Hoists?

JDN Air Hoists work at a nominal pressure of 6 bar (85 psi). The hoists are designed in such a way that the full load can be lifted at 5,4 bar (76,5 psi) that a possible loss at the hose is compensated. On request special version for 4 bar (58,02 psi) are available.

In which areas can JDN Air Hoists be operated?

JDN Air Hoists and cranes are – contrary to electrically operated – suitable for application in hazardous areas as the driving medium air opposite to electricity does not produce any sparks.

JDN Air Hoists are working with air as supply medium. The air at a working pressure of appr. 6 bar (85 psi) is expanded in the motor. The expansion of air leads to a decrease of the air temperature, which cools the motor. On the latest generation of the PROFI and mini series the air flows through channels within the gear box and so also the gear train is cooled.

Due to this feature there is no down time and the rating is 100% duty cycle instead of electric hoists.

How many starts and stop with full load are permitted?

There is no limitation in starts/stops per hour.

What is the operational temperature?

Air hoists are insensitive with respect to high and low temperatures (70°C at motor, 150°C on chain and hook).

What are the benefits by using air hoists?
How are JDN Air Hoists protected against overload?

JDN Air Hoists PROFI comply the machine directive and therefore have an overload protection on all products with SWL´s starting from 1000 kg. The sophisticated control ensures that in case of overload the hoist stops. To unlock the stopped hoist it has to be lowered by the pendant control to release the latched overload device.

On electric equipment the compartment or case is classified according to IP or NEMA. For example means IP 68 a housing safe against dust ingress and submersible for a certain time acc. to manufactures specification.

An Air Hoists is an open system which is by nature sturdy and insensitive against dirty, aggressive and humid environment. The supply air blows out any ingress. So this makes the air hoist a unique and reliable tool in harsh environment and incomparable to electric hoists.

What to do in case of malfunctioning?
Which hoist is suitable for my application?

The mini widens the range of application in the light duty sector as a handy, flexible and universally deployable hoist making it an ideal tool for the most different handicraft workshops.
Carrying capacities: 125 kg up to 980 kg

JDN Air Hoists PROFI Series are very robust and therefore suitable for tough industrial applications even in continuous working processes. According to requirement there are various control systems. For traversing loads there are different trolleys to meet your special demands.
Carrying capacities: 250 kg up to 100 t

How to identify a spare part?

How can I classify gases and vapours to explosion groups and temperature classes?

The table gives you a short overview acc. to ATEX. Please refer to your operation manual and relevant standards for more information.

How to compare UL Division System and ATEX Zone System?

Both, Division and Zone System classify areas based on:

What does the EX-Marking on JDN Hoists mean?

All hoists are marked with the EX-Markings acc. to the ATEX standard.

Acc. to ATEX every operator of a plant has to classify the hazardous areas of the plant into ZonesThe image illustrates simplified the zones of explosives atmospheres: 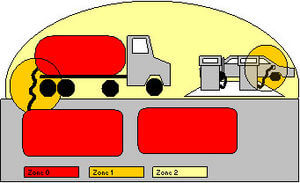 Zone 1
Zone 1 hazardous area is classified as an area where an explosive atmosphere is likely to occur during normal operation. These conditions would be expected to be present for between 10 and 1000 hours per year.

Zone 2
In zone 2 hazardous area an explosive gas is not likely to occur during normal operation but if it should occur for some reason it would only exist for a short time. A potentially explosive atmosphere will occur for less than 10 hours per year.

How to order spare parts?

For correct handling of your spare part order the part number of the according spare part list is required. For us it is quite helpful to have the serial number of the hoist mentioned on the nameplate. 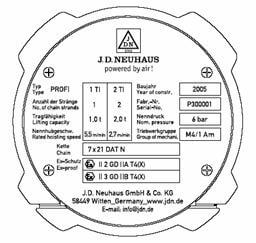 If your question is not answered within the FAQ chapter please contact JDN or our local representative.

As we are trying to update this information for your further assistance kindly let us have your feedback at info@jdn.de enabling us to improve our FAQ chapter.