From the wooden winch to the pneumatic hoist

For J.D. Neuhaus GmbH Co. KG in Witten-Heven, the year 2020 is something special. It will be celebrating its 275-year anniversary. A brief insight into its history reflects the entrepreneurial spirit of seven generations of the hoist manufacturers from the Ruhr region, which is still run by the same family to this day, and bears witness to the innovation generated around creating benefits for its users.

“If we have learned anything, then it is to always make things a bit better than they should actually be.”

This is how Wilfried Neuhaus-Galladé, managing partner of J.D. Neuhaus GmbH Co. KG, gets to the heart of the 275-year history of his company. The first testament to this statement was delivered by Johann Diederich Conrad Neuhaus in 1745 with the development and manufacture of a wooden winch. This was a stroke of genius at the time. The idea came to the master smith when he observed the following event: Carters had to lift their heavy horse-drawn carriages with muscle power in order to change broken axles or spokes.

The wooden winch mentioned above came to their aid, making it much easier to lift the carts. Convinced by the result of his work and the economic advancement that came with it, Johann Diederich Conrad Neuhaus had himself registered as a “manufacturer” in the “Master Role at the Sprockhövel Factory” (Meister Rolle der Sprockhövelschen Fabricke). Thus, the foundation stone for the J.D. Neuhaus company was laid. The mindset from the company’s early days still applies in a certain way in the present. But let us start at the beginning. 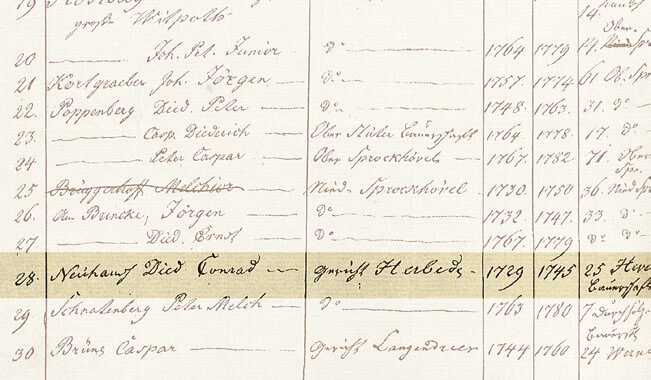 Over the course of time, winches which were constantly improving technically were being used in new areas of application, e.g. to lift train carriages off of rails, and made work processes increasingly more efficient in many areas of application, such as in coal mines. This success can be attributed to the long-sightedness of Louis Neuhaus and his wife Emma. As early as the 1880s, the winches produced by J.D. Neuhaus were in the position to move loads of up to 7500 kg.

In the challenging years between the two world wars, the business established itself as a permanent feature of the lifting engineering segment. Emma Neuhaus, who assumed sole responsibility for the family, house and business in 1905 following the death of Louis Neuhaus, had a considerable part in this. Without her reliability, the centuries-old tradition could easily have found its end. In 1922, in agreement with her second husband and surviving children, she placed the destiny of the company into the hands of her youngest son, Max Neuhaus. Besides the inventive spirit, the increasingly better properties of the available materials did the rest for the prosperity of the business. Embracing all things, this allowed for a more compact construction of the winches as well as greater outputs and a longer service life.

Picture right: Impression of the work in the Neuhaus smithy anno 1745

After the Second World War, large quantities of steel and coal were required to re-establish German industry. As a result of this, the demand for hoists for different uses increased, above all in the domestic mining industry. J.D. Neuhaus also profited from this. The former managing director, Max Neuhaus, recognised the opportunities associated with this. The order books began to rapidly fill up. In order to be able to manufacture products according to their own quality requirements and to deliver them within acceptable times, the company owners came to the decision in 1951 to invest in a second factory hall, with modern machines and well thought-out production processes.
The next milestone was set by the 6th generation in 1952 with J. Diederich Neuhaus. Max Neuhaus’ son came up with the idea of replacing manual hoists with a pneumatically operated vane motor. With this technical innovation, the miners were in the position to perform their work below ground in a way which was less physically demanding, safer and more efficient.

J. Diederich Neuhaus was already convinced at the time that the pneumatic hoist will catch on in many applications where there is a risk of explosion. And he turned out to be right. Today, pneumatic hoists from Witten-Heven are used for protection against explosions in many industries and under harsh conditions and are a permanent feature of, for instance, the onshore and offshore industry.

As it was then, so it is today, that the inventive spirit and intuition for the needs of the market form the focus of the commercial way of thinking and acting at J.D. Neuhaus. The extensive product portfolio of explosion-proof travelling cranes, suspension cranes, swing cranes and rotary cranes is testament to this. But it is not only innovative hoists and crane solutions which from the company’s own specifications.

Wilfried Neuhaus-Galladé set ambitious, future-oriented goals when he took over at the helm of the hoist manufacturer in 1995 as the seventh generation. The start was rocky, however. Mining, one of the most important markets in any age, no longer held the same importance in Germany as it did in the previous decades; many mines were closed, an industry was almost facing extinction. With that came the corresponding consequences for the business of J.D. Neuhaus. This presented a great challenge for the new managing director, and also an opportunity. With strong managerial knowledge and a dedicated team, it was possible to acquire new markets and open up new user industries domestically and abroad. The establishment of a worldwide distribution network, with subsidiaries in the USA, France, United Kingdom and Singapore, has increased the export share of JDN products to more than 80 percent today. Companies from 70 industries in 90 countries from around the world are listed in the customer books. Up to 8000 hoists leave the factory halls in Witten-Heven each year. Innovative product developments certainly played a significant part in this success. This included, among other things, pneumatic hoists in the Pro series with explosion protection, which cover the load capacity segment from 250 kg to 100 tons for use under the toughest industrial conditions.

“In all our thoughts and actions we have a duty to our 275 years of tradition in innovation.“

But it is not only the global orientation, the development and production of innovative hoist series which define the company’s road to success under the leadership of Wilfried Neuhaus-Galladé to this day. An important issue for him was and is the continual improvement process in production and organisation. Thus, in the first years of his leadership, a start was made to modernise production. It was not long before the expected increase in efficiency and in many ways was an important step into the new age. In addition, besides the core competence to develop innovative pneumatic hoists, it made a significant contribution towards J.D. Neuhaus becoming the market leader in the field of pneumatic and hydraulic hoists in the last three decades. Today, the machine park, with modern systems, is certainly a high benchmark in the industry. The aforementioned successes would not have been possible without the dedicated employees in all divisions of the company, however. Evidence that there is no standing still for the manufacturer is found in the development of the new “mini” series. The compact pneumatic hoists with integrated NFC Tag and Service App are unique throughout the industry. Efficiency can be optimised when compared with the previous model. The operator profits from noticeably reduced overall running costs. By developing the series, the company has been able to win additional market shares above all in the automotive, food, pharmaceutical and chemical industries.

But resting on one’s laurels following such success does not fit with the philosophy of a company rich in tradition and oriented towards the future. And so the next great challenge is already approaching: Digitisation. In Witten-Heven things are already under way to open up the opportunities of digitisation for hoist operators.